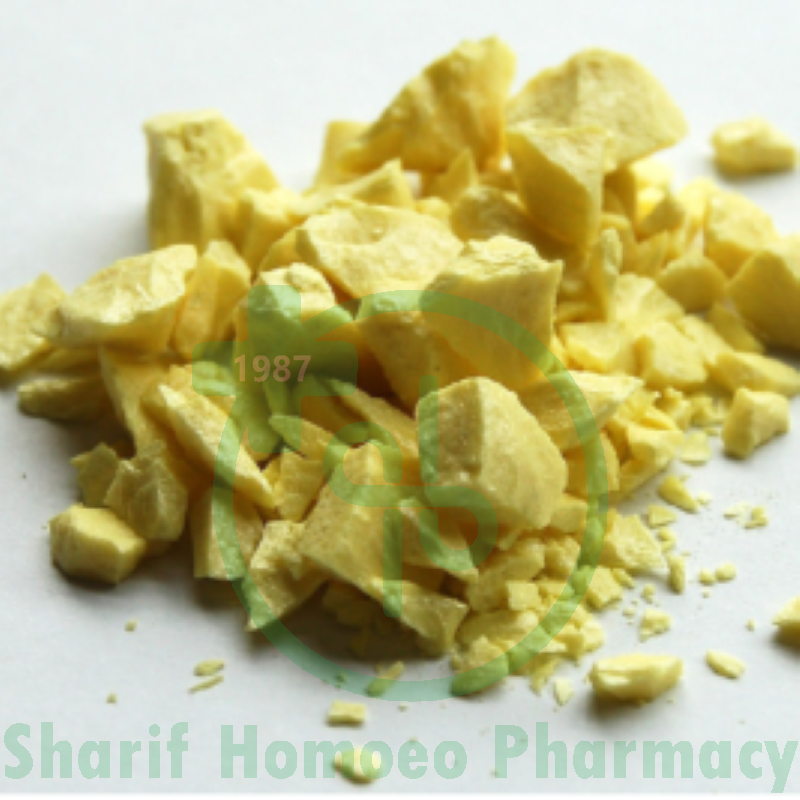 Causticum is a homoeopathic remedy used for chronic rheumatic, arthritic and paralytic infections. that is obtained from the compound potassium. It has been useful for many ailments for centuries. ... It is often a remedy of choice for physical symptoms of cough, skin conditions and urinary complaints and muscle tremors.

Manifests its action mainly in chronic rheumatic, arthritic and paralytic affections, indicated by the tearing, drawing pains in the muscular and fibrous tissues, with deformities about the joints; progressive loss of muscular strength, tendinous contractures. Broken down seniles. In catarrhal affections of the air passages, and seems to choose preferably dark-complexioned and rigid-fibered persons. Restlessness at night, with tearing pains in joints and bones, and faint-like sinking of strength. This weakness progresses until we have gradually appearing paralysis. Local paralysis, vocal cords, muscles of deglutition, of tongue, eyelids, face, bladder and extremities. Children are slow to walk. The skin of a Causticum person is of a dirty white sallow, with warts, especially on the face. Emaciation due to disease, worry, etc, and of long standing. Burning, rawness, and soreness are characteristic.

Head.--Sensation of empty space between forehead and brain. Pain in right frontal eminence.

Face.--Paralysis of right side. Warts. Pain in facial bones. Dental fistula. Pain in jaws, with difficulty in opening mouth.

Eyes.--Cataract with motor disturbances. Inflammation of eyelids; ulceration. Sparks and dark spots before eyes Ptosis (Gels). Vision impaired, as if film were before eyes. Paralysis of ocular muscles after exposure to cold.

Mouth.--Bites inside of cheek from chewing. Paralysis of tongue, with indistinct speech. Rheumatism of articulation of lower jaw. Gums bleed easily.

Stool.--Soft and small, size of goose-quill (Phos). Hard, tough, covered with mucus; shines like grease; small-shaped; expelled with much straining, or only on standing up. Pruritus. Partial paralysis of rectum. Rectum sore and burns. Fistula and large piles.

Respiratory.--Hoarseness with pain in chest; aphonia. Larynx sore. Cough, with raw soreness of chest. Expectoration scanty; must be swallowed. Cough with pain in hip, especially left worse in evening; better, drinking cold water; worse, warmth of bed. Sore streak down trachea. Mucus under sternum, which he cannot quite reach. Pain in chest, with palpitation. Cannot lie down at night. Voice re-echoes. Own voice roars in ears and distresses. Difficulty of voice of singers and public speakers (Royal).

Back.--Stiffness between shoulders. Dull pain in nape of neck.

Skin.--Soreness in folds of skin, back of ears, between thighs. Warts large, jagged, bleeding easily, on tips of fingers and nose. Old burns that do not get well, and ill effects from burns. Pains of burns. Cicatrices freshen up; old injuries reopen. Skin prone to intertrigo during dentition.

Relationship.--According to the careful investigations of Dr. Wagner of Basel, Causticum corresponds to Ammon causticum 4x. Causticum does not agree with Phosphorus; the remedies should not be used after each other. Diphtherotoxin follows, causticum in chronic bronchitis.

Dose.--Third to thirtieth attenuation. In chronic ailments and especially in paralytic states, the higher potencies once or twice a week.