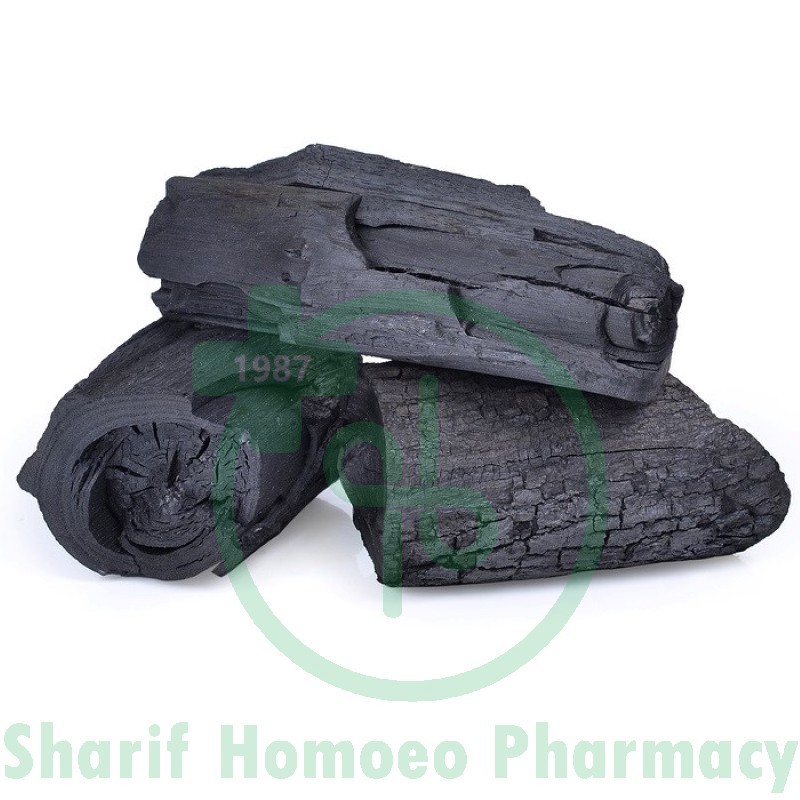 Carbo Vegetabilis may relieve excessive gas‚ indigestion‚ bloating‚ and belching. The remedy may calm the digestive system to provide relief from various symptoms associated with indigestion. Vegetable charcoal might also help with colds‚ cough‚ and ringing in the ears.

Disintegration and imperfect oxidation is the keynote of this remedy. The typical Carbo patient is sluggish, fat and lazy and has a tendency to chronicity in his complaints. Blood seems to stagnate in the capillaries, causing blueness, coldness, and ecchymosis. Body becomes blue, icy-cold. Bacteria find a rich soil in the nearly lifeless stream and sepsis and typhoidal state ensues.

A lowered vital power from loss of fluids, after drugging; after other diseases; in old people with venous congestions; states of collapse in cholera, typhoid; these are some of the conditions offering special inducements to the action of Carbo veg. The patient may be almost lifeless, but the head is hot; coldness, breath cool, pulse imperceptible, oppressed and quickened respiration, and must have air, must be fanned hard, must have all the windows open. This is a typical state for Carbo veg. The patient faints easily, is worn out, and must have fresh air. Hćmorrhage from any mucous surface. Very debilitated. Patient seems to be too weak to hold out. Persons who have never fully recovered from the effects of some previous illness. Sense of weight, as in the head (occiput), eyes and eyelids, before the ears, in the stomach, and elsewhere in the body; putrid (septic) condition of all its affections, coupled with a burning sensation. General venous stasis, bluish skin, limbs cold.

Mind.--Aversion to darkness. Fear of ghosts. Sudden loss of memory.

Head.--Aches from any over-indulgence. Hair feels sore, falls off easily; scalp itches when getting warm in bed. Hat pressed upon head like a heavy weight. Head feels heavy, constricted. Vertigo with nausea and tinnitus. Pimples on forehead and face.

Stomach.--Eructations, heaviness, fullness, and sleepiness; tense from flatulence, with pain; worse lying down. Eructations after eating and drinking. Temporary relief from belching. Rancid, sour, or putrid eructations. Waterbrash, asthmatic breathing from flatulence. Nausea in the morning. Burning in stomach, extending to back and along spine. Contractive pain extending to chest, with distention of abdomen. Faint gone feeling in stomach, not relieved by eating. Crampy pains forcing patient to bend double. Distress comes on a half-hour after eating. Sensitiveness of epigastric region. Digestion slow; food putrefies before it digests. Gastralgia of nursing women, with excessive flatulence, sour, rancid belching. Aversion to milk, meat, and fat things. The simplest food distresses. Epigastric region very sensitive.

Male.--Discharge of prostatic fluid at stool. Itching and moisture at thigh near scrotum.

Dose.--First to third trituration in stomach disorders. Thirtieth potency and higher in chronic conditions, and in collapse.