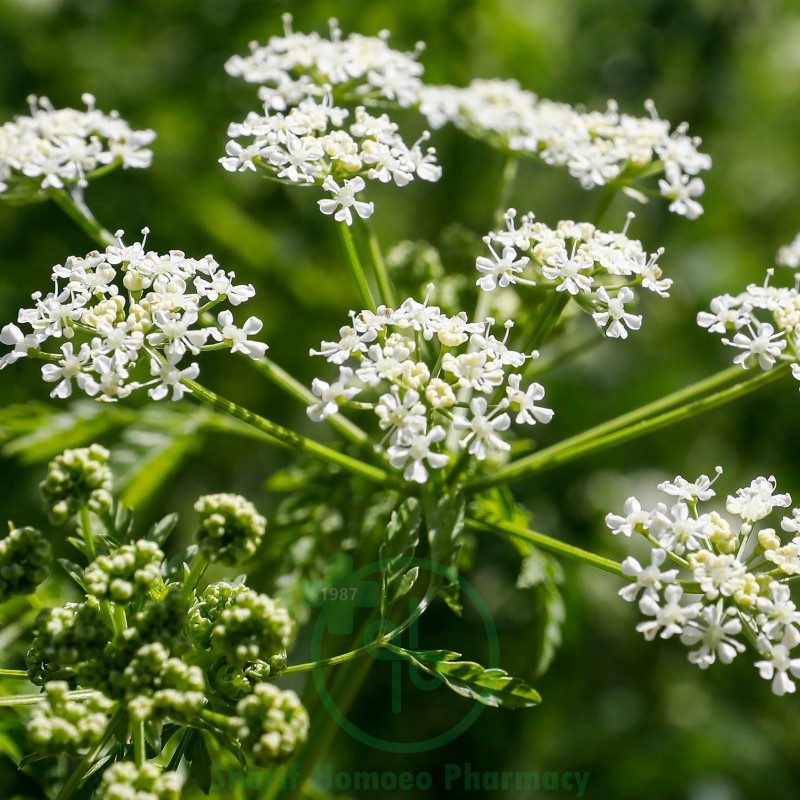 Conium Mac Dilution is a powerful homoeopathy medicine for treating sexual weakness and urinary infections. It helps in relieving spasmodic contractions and acrid heartburn. It helps in treating inconsistent discharge of urine. Pain in auxiliary glands and healing of ulcers can also be corrected using this medicine.

Directions For Use
Take 3-5 drops two to three times a day with 1 teaspoon of water or as directed by the physician.

An old remedy, rendered classical by Plato's graphic description of its employment in the death of Socrates. The ascending paralysis it produces, ending in death by failure of respiration, shows the ultimate tendency of many symptoms produced in the provings, for which Conium is an excellent remedy, such as difficult gait, trembling, sudden loss of strength while walking, painful stiffness of legs. etc. Such a condition is often found in old age, a time of weakness, languor, local congestions, and sluggishness. This is the special environment that Conium choose to manifest its action. It corresponds to the debility, hypochondriasis, urinary troubles, weakened memory, sexual debility found here. Trouble at the change of life, old and bachelors. Growth of tumors invite it also. General feeling as if bruised by blows. Great debility in the morning in bed. Weakness of body and mind, trembling, and palpitation. Cancerous diathesis. Arterio-sclerosis. Caries of sternum. Enlarged glands. Acts on the glandular system, engorging and indurating it, altering its structure like scrofulous and cancerous conditions. Tonic after grippe. Insomnia of multiple neuritis.

Mind.--Excitement causes mental depression. Depressed, timid, averse to society, and afraid of being alone. No inclination for business or study; takes no interest in anything. Memory weak; unable to sustain 'any mental effort.

Head.--Vertigo, when lying down, and when turning over in bed, when turning head sidewise, or turning eyes; worse, shaking head, slight noise or conversation of others, especially towards the left. Headache, stupefying, with nausea and vomiting of mucus, with a feeling as of foreign body under the skull. Scorched feeling on top. Tightness as if both temples were compressed; worse after a meal. (Gels.; Atropine.) Bruised, semilateral pains. Dull occipital pain on rising in morning.

Eyes.--Photophobia and excessive lachrymation. Corneal pustules. Dim-sighted; worse, artificial light. On closing eyes, he sweats. Paralysis of ocular muscles. (Caust.) In superficial inflammations, as in phlyctenular conjunctivitis and keratitis. The slightest ulceration or abrasion will cause the intensest photophobia.

Stomach.--Soreness about the root of tongue. Terrible nausea, acrid heartburn and acid eructations; worse on going to bed. Painful spasms of the stomach. Amelioration from eating and aggravation a few hours after meals; acidity and burning; painful spot the level of the sternum.

Respiratory.--Dry cough, almost continuous, hacking; worse, evening and at night; caused by dry spot in larynx with itching in chest and throat, when lying down, talking or laughing, and during pregnancy. Expectoration only after long coughing. Want of breath on taking the least exercise; oppressed breathing, constriction of chest; pains in chest.

Back.--Dorsal pain between shoulders. Ill effects of bruises and shocks to spine. Coccyodynia. Dull aching in lumbar and sacral region.

Skin.--Axillary glands pain, with numb feeling down arm. Induration after contusions. Yellow skin, with papular eruption; yellow finger-nails. Glands enlarged and indurated, also mesenteric. Flying stitches through the glands. Tumors, piercing pains; worse, at night. Chronic ulcers with fetid discharge. Sweat as soon as one sleeps, or even when closing eyes. Night and morning sweat, with offensive odor, and smarting in skin.

Modalities.--Worse, lying down, turning or rising in bed; celibacy; before and during menses, from taking cold, bodily or mental exertion. Better, while fasting, in the dark, from letting limbs hang down, motion and pressure.