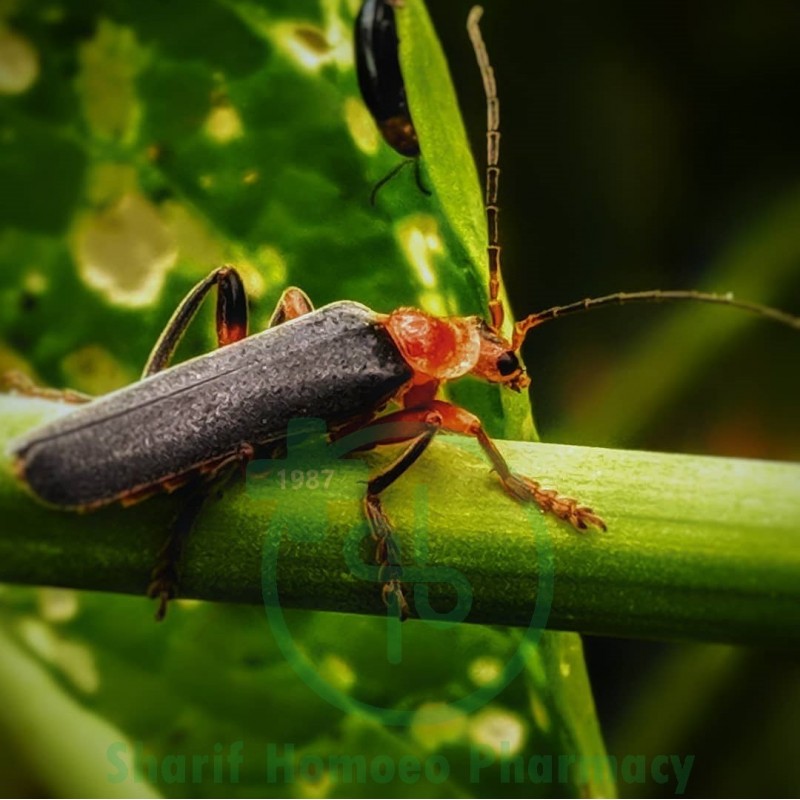 Cantharis (Spanish Fly) is a homeopathic remedy used for acute inflammations of the mucosae, the urinary orgasms, the reproductive organs, the gastrointestinal tract, and the skin with formations of blisters, effusions in cavities of the body, minor burns and scalds.

Head.--Burning in brain. Sensation as if boiling water in brain. Vertigo; worse in open air.

Ears.--Sensation as if wind were coming from ear, or hot air. Bones about ear painful (Capsic).

Stool.--Shivering with burning. Dysentery; mucous stools, like scrapings of intestines. Bloody, with burning and tenesmus and shuddering after stool.

Urine.--Intolerable urging and tenesmus. Nephritis with bloody urine. Violent paroxysms of cutting and burning in whole renal region, with painful urging to urinate; bloody urine, by drops. Intolerable tenesmus; cutting before, during, and after urine. Urine scalds him, and is passed drop by drop. Constant desire to urinate. Membranous scales looking like bran in water. Urine jelly-like, shreddy.

Back.--Pain in loins, with incessant desire to urinate.

Fever.--Cold hands and feet; cold sweat. Soles burn. Chill, as if water were poured over him.

Dose.--Sixth to thirtieth potency. Bears repeated doses well. Locally, in burns and eczema, 1x and 2x, in water, or as cerate.