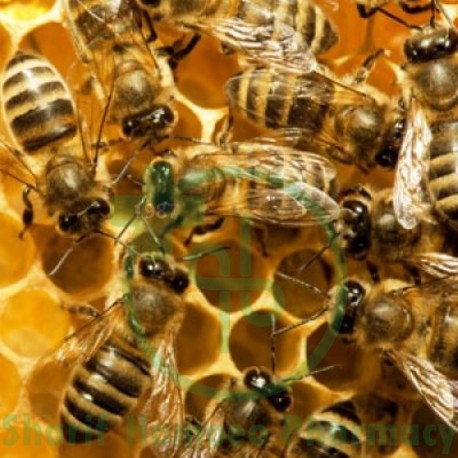 Apis Mellifica is a remedy from the honey bee used mainly to relieve inflammation from urticaria and bites characterized by great redness and swelling. The symptoms are often better with cold applications or cool air. It can also be used to treat inflammation of arthritis.

The very characteristic effects of the sting of the bee furnish unerring indications for its employment in disease. Swelling or puffing up of various parts, śdema, red rosy hue, stinging pains, soreness, intolerance of heat, and slightest touch, and afternoon aggravation are some of the general guiding symptoms. Erysipelatous inflammations, dropsical effusions and anasarca, acute, inflammation of kidneys, and other perenchymatous tissues are characteristic pathological states corresponding to Apis. Apis acts especially on outer parts, skin, coatings of inner organs, serous membranes. It produces serous inflammation with effusion, membranes of brain, heart, pleuritic effusion, etc. Extreme sensitiveness to touch and general soreness is marked. Constricted sensations. Sensation of stiffness and as of something torn off in the interior of the body. Much prostration.

Respiratory.--Hoarseness; dyspnśa, breathing hurried and difficult. Śdema of larynx. Feels as if he could not draw another breath. Suffocation; short, dry cough, suprasternal. Hydrothorax.

Fever.--Afternoon chill, with thirst; worse on motion and heat. External heat, with smothering feeling. Sweat slight, with sleepiness. Perspiration breaks out and dries up frequently. Sleeps after the fever paroxysm. After perspiration, nettle rash, also with shuddering.

Modalities.--Worse, heat in any form; touch; pressure; late in afternoon; after sleeping; in closed and heated rooms. Right side. Better, in open air, uncovering, and cold bathing.

Dose.--Tincture to thirtieth potency. In śdematous conditions the lower potencies. Sometimes action is slow; so several days elapse before it is seen to act, and then urine is increased. Apium virus, sixth trituration.