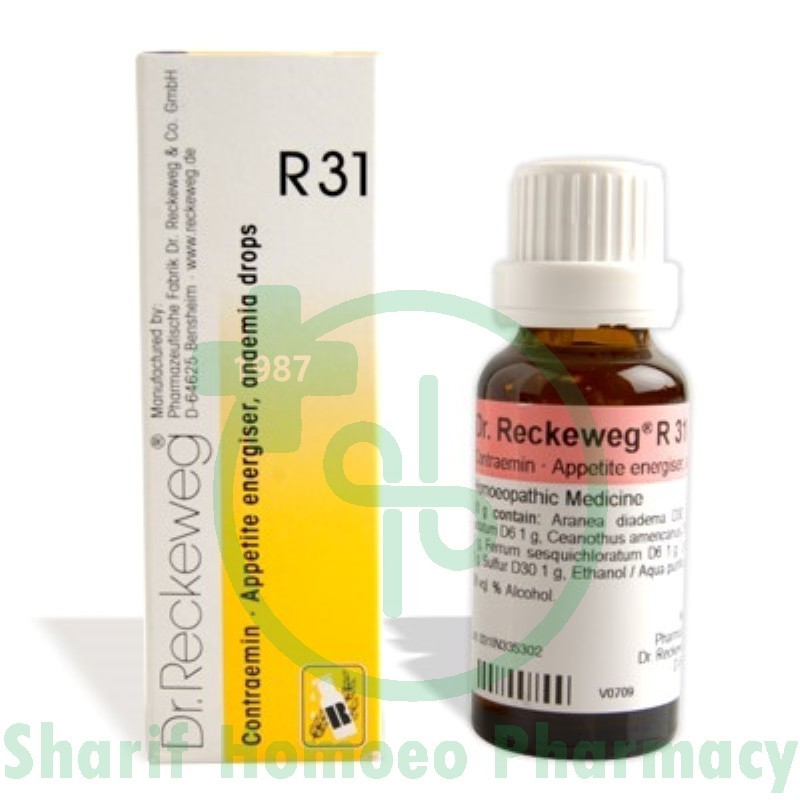 Anaemia; lack of appetite, especially among children; often accompanied by swellings. After-effects of acute ailments. All kinds of anaemia frequently induced by the new toxicant effect of the treatment of other illnesses.

MODE OF ACTION OF MAIN INGREDIENTS:

Arsen. jodatum has a beneficient effect on cellular metabolism. This means that the action extends to the blood-producing system and this is further heightened by the effect of Lycopodium on the functioning of the spleen as energised by Ceanothus americanus.

The action of the remedy already becomes noticeable after the very first few days of the treatment; it translates as increased appetite and higher number of haematites, without involving the organism into any excess.

There will be no accumulation of fat. Homoeopathic medicines always work in a non-toxic and harmonizing way. The technique of R31 in action is brought out in the following symptomatology:

Aranea diadema: Sensitivity to changes in the weather.

Ceanothus americanus: Injured spleen (i.e. after malaria). Pains in the tummy (left side). Perturbations in the production and circulation of the blood.

Lycopodium: Tonic and functional remedy of the liver in case of swellings (pain in left side), lack of appetite (quick satiety); reddish deposit in urine.

- General rule: 3 times a day 10-15 drops in a little water before meals. During the first days of treatment, in case of pronounced anaemia, frequent doses, eventually 6-10 times daily 10-15 drops. On noting improvement, reduce the dose to 2-3 times a day. It is important not to stuff children with chocolate, sweets and eggs, as the overwork the liver and reduce appetite.

- Recommended food for children: milk puddings, oats flakes, vegetables and fruit. Meat is viewed as a complementary food whilst pork in any form: bacon, sausages, ham etc. will be avoided.

- This also applies to anaemic adults.

- The above preparations may be given in addition to or in alternation with R1, depending upon symptoms.