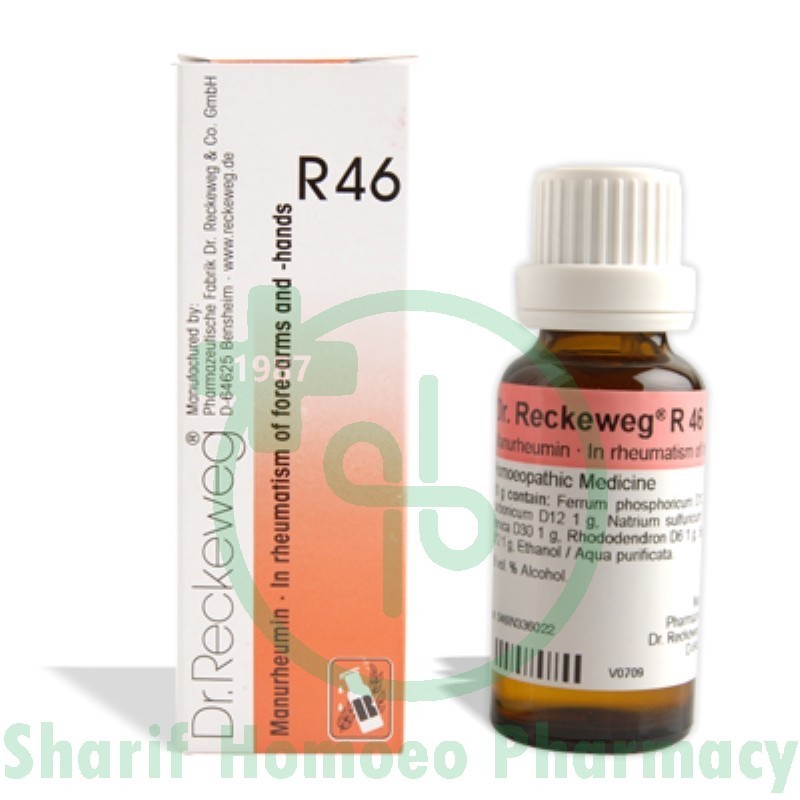 This remedy may also be used in other rheumatic aches (growing worse in damp weather) such as: sciatica, rheumatism in the knees, shoulders, pains in the sacral region, inflammation of articulations of the haunches, intercostal neuralgia, rheumatism of the occiput.

The present remedy may also be used in feverish infections growing worse or caused by humidity.

Lithium carbonicum: Specific effect in rheumatism and gout, in arthritis with deformation and rheumatic-gouty illnesses

Natrium sulfuricum: Aggravation by humidity in rheumatism and asthma.

Nux vomica: Worse on getting up, low spirits in the morning.

Rhododendron: Chronic rheumatism, pains in limbs and mainly in bones of fore-arms and hands.

Spiraea ulmaria: Fluttering pains, localized in the articulations of the elbows.

- Will be adapted according to the acuteness of the pains. In general 2-3 times daily 10-15 drops in a little water before meals for a longer period of time (eventually to be alternated with other complementary remedies). In acute cases take 10 drops every ½-1 hours.

- After improvement take 10-15 drops every 2-3 hours (also the other complementary remedies - eventually in the morning, at noon and at night).

- R1 in pains arising from the tonsils or articular inflammations following angina.

- R6 in feverish infections or influenza after drenching.

- R16 in migraine and neuralgia (coming from the sacral region radiating up to the nose).

- R50 in sacroiliac complaints of women, eventually with pains along the vertebral column.

- It is advisable to use only R46 in the beginning (especially when the pains are localized in the articulations of the hands), before making any combinations with two or three complementary remedies.