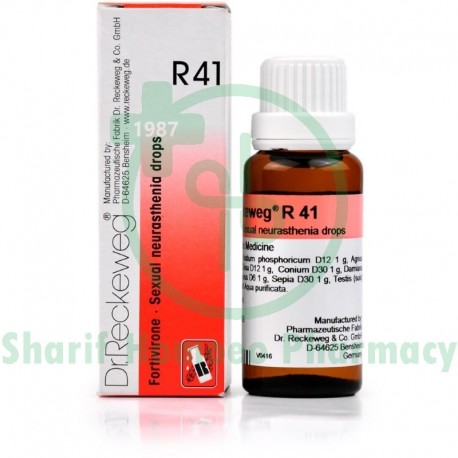 Helps in premature ejaculation, erection defect, nightfall, weakness. R41 Drops is useful as a Tonic in case of Impotence

After-effects of debilitating illnesses, overwork on physical or other planes.

Against various kind of ailments in old-age.

The composition of fortivirone has been adapted in such a way as to influence the different systems, with special emphasis on the vitality glands. The combination so formulated has good results over the common problems of male complaints arising due to gland problems.

The combination so used and the action of medicines is as follows:

Acidum phosphoricum: Useful as a Tonic in case of Impotence and Restores energy and improves vitality. In male complaints about Lack of confidence, lack of vitality.

Agnus castus: Useful in Lack of vitality; weakness, with high efficacy in low dilution. No erections with yellow discharge and coldness of the parts is relieved with this medicine.

China: Specific effect in cases of disturbances of vitality and ejaculation after debilitating illnesses.

Damiana: Strengthens the genital regions, relieving the problem of ejaculation and erections.

Sepia: Acts in cases of exhaustion of all cellular functions, fatigue, aversion for coition.

Testes: Acts as substitute and stimulant in males to restore stamina in men.

We have assumed that you have consulted a physician before purchasing this medicine and are not self-medicating.